The April 2021 issue of the Gisborne Herald’s Forestry for Life feature takes a closer look at Eastland Port’s Twin Berth project, which will meet the increased capacity need for forestry and other industries vital to the economic wellbeing of Tairawhiti.

You can read and download the April issue at this link, or read on.

The forestry industry is a key driver of Tairāwhiti’s economy so it’s essential Eastland Port can continue to handle the predicted increases in log export volumes.

Eastland Port is the second-largest and most efficient log export port in New Zealand. The port and ISO teams ensure that around three million JAS is exported each year off a single log berth. But as the multiple ships often waiting in the bay show, the port has reached capacity.

“Right now we can’t entertain other opportunities because we are tapped out, despite being the most efficient log exporting port in New Zealand,” said Eastland Group chief operating officer Andrew Gaddum.

“We’re reaching the maximum volumes we’re able to export with what we have.”

To support the growth in forestry in the future, the port must upgrade existing infrastructure and increase its capacity to handle logs and berth ships. There are also opportunities to introduce containerisation. This will help underpin further development in wood processing, along with the horticulture and agriculture industries, by capitalising on the “blue highway”.

So, Eastland Port is embarking on its biggest infrastructure project in more than 100 years.

Planning for the Twin Berth project started five years ago and will be a significant milestone for Eastland Port and Tairāwhiti.

When completed, two ships between 185 and 200 metres in length will be able to load and unload safely. These will include logging ships, produce vessels, wood chip ships, coastal container vessels and smaller cruise liners. This will help unlock Tairāwhiti’s long-term economic growth by providing the capacity needed by a thriving forestry industry, unlocking the potential of a coastal container service, offering more opportunities for exporters and importers, and creating more jobs in the region.

Stage 1 of the Twin Berth project at Eastland Port has received consent and will start in the next few months, with the rebuild of Wharf 7 and the slipway.

The resource consents for Stage 1 were lodged in 2017 and originally granted by independent commissioners in 2018. Several parties subsequently appealed that decision to the Environment Court.

Eastland Port has worked through the issues raised and collectively come up with solutions. As a result, the plans have been altered significantly based on input from local hapū, iwi, other stakeholders and the community.

Key outcomes include ensuring the integrity of Te Toka-a-Taiau, the historic rock at the mouth of the Turanganui River, is respected and preserved. The slipway upgrades will provide an enhanced habitat for juvenile crayfish and marine invertebrates.

And Eastland Port will monitor and report on a wider range of environmental factors.

“What we’ve come up with takes into consideration what the benefits to the region will be, and not just in terms of export opportunities and the associated region-wide economic benefits,” said Mr Gaddum.

“The plans also respect the integrity of historical and cultural sites around the port, and will support social, recreational and environmental initiatives.

“Developing closer relationships with hapū and iwi is fundamental to the future success of all projects here at the port.”

As part of this the port has formalised a consultative partnership with the hapū of Turanganui-a-Kiwa.

Wharf 7 and the seawall

The tenders for Wharf 7 will be reviewed over the coming weeks, with final design details and costings being worked through. The rebuild is due to start around July and will take 20 months to complete.

Contractors will demolish and then rebuild Wharf 7 so it has the strength to allow mobile harbour cranes to operate on it.

“The new wharf will be a ‘level 4 lifeline asset’, meaning it will be designed and constructed to operate after a once-in-2500-year earthquake event,” Mr Gaddum said.

“This is the same standard required for other critical lifeline infrastructure, with special post-disaster functions like hospitals.

“The port team will work closely with our customers, other port users and the community to make sure they’re kept updated, and we’re aiming to minimise the impacts of the construction work as much as possible.”

The seven-metre high seawall is a vital line of defence against disruptive swells, large waves and small-to-medium-sized tsunamis, and it helps protect the log yards located at sea level.

Eastland Port has awarded the tender to rebuild the eastern end of the seawall. This will begin shortly, with the project due to be completed before the end of the year.

Later this year, the second significant resource consent application will be lodged by the port, encompassing Stage 2 of the Twin Berth development.

This consent will cover the extension of the existing Wharf 8 structure; about one-and-a-half-hectares of reclamation; dredging the channel and harbour; and the rebuilding of the existing outer breakwater structure.

It will also include upgrading the southern log yard with the port’s award-winning stormwater  treatment system.

Community consultation is a key part of the Stage 2 consent process and includes presentations, newsletters, emails, drop-in sessions, a website and other opportunities for people to share their thoughts and ideas.

“It’s important people in the forestry sector and right across the community provide feedback through the resource consent process for the second stage of the project,” said Mr Gaddum.

In total, the projects are part of the $140 million upgrade of port facilities planned over the next 10 years. Like many other Eastland Group infrastructure projects, the redevelopments will be funded through the group’s debt facility and paid down over time through cashflow.

With more than a quarter of employment in Tairāwhiti coming from forestry and agriculture, and the processing of the products from these industries, increased capacity at Eastland Port will bring huge benefits to the region.

In the short-term, economic modelling suggests the project will create over 100 direct jobs and put $84 million in the pockets of local contractors. Long-term, it is forecast to support the creation of as many as 3,000 new jobs across forestry, horticulture, agriculture and other local industries, and add $250m to the region’s GDP.

“I’d like to take this opportunity to thank ISO, the port team, the truckies and everyone in the forestry supply chain for playing their part,” said Mr Gaddum. “It’s a result that we can all be very proud of, as it helps to underpin a thriving forestry industry and a thriving Tairāwhiti.” 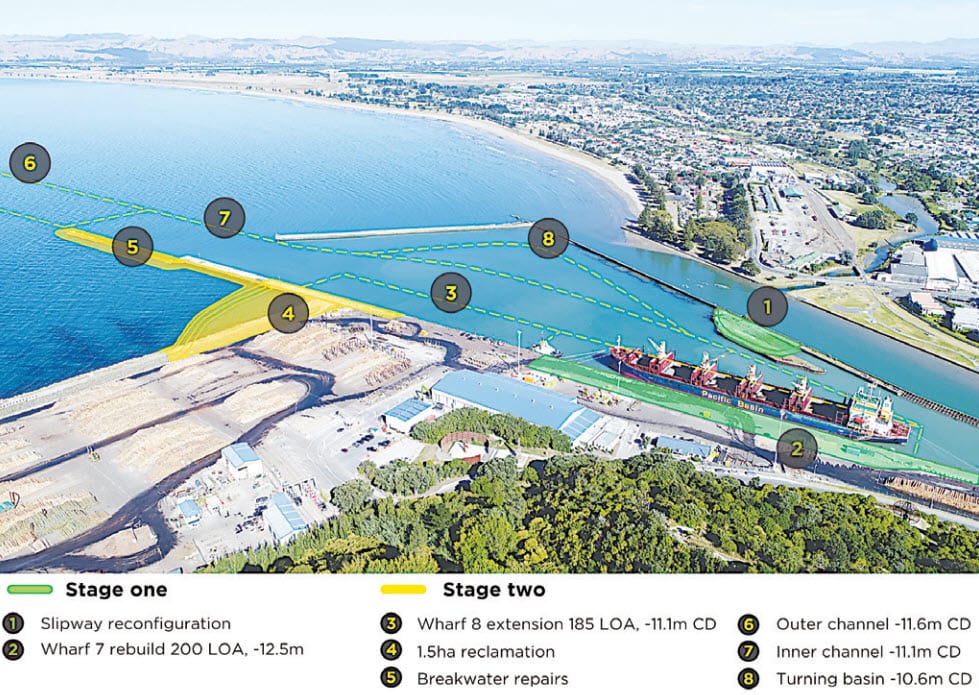